Gibraltar, Naples, Alexandria, Djibouti, India, Singapore, Kelang, Colombo, Abu Dhabi and Eilat. The deployment of a lifetime. As the ship slipped gracefully out of Devonport visits to these far off, exotic places were in everyone's thoughts. Lots of sun, beaches and plenty of sights to see. There was a certain amount of work to be done before the start of the deployment and this took the form of Exercise Springtrain. Most the Navy's major warships took part in this exercise off to the west of Portugal during late March. All the ships spent an enjoyable weekend in Gibraltar taking part in a sports Olympiad as well as sampling the delights of various hostelries. 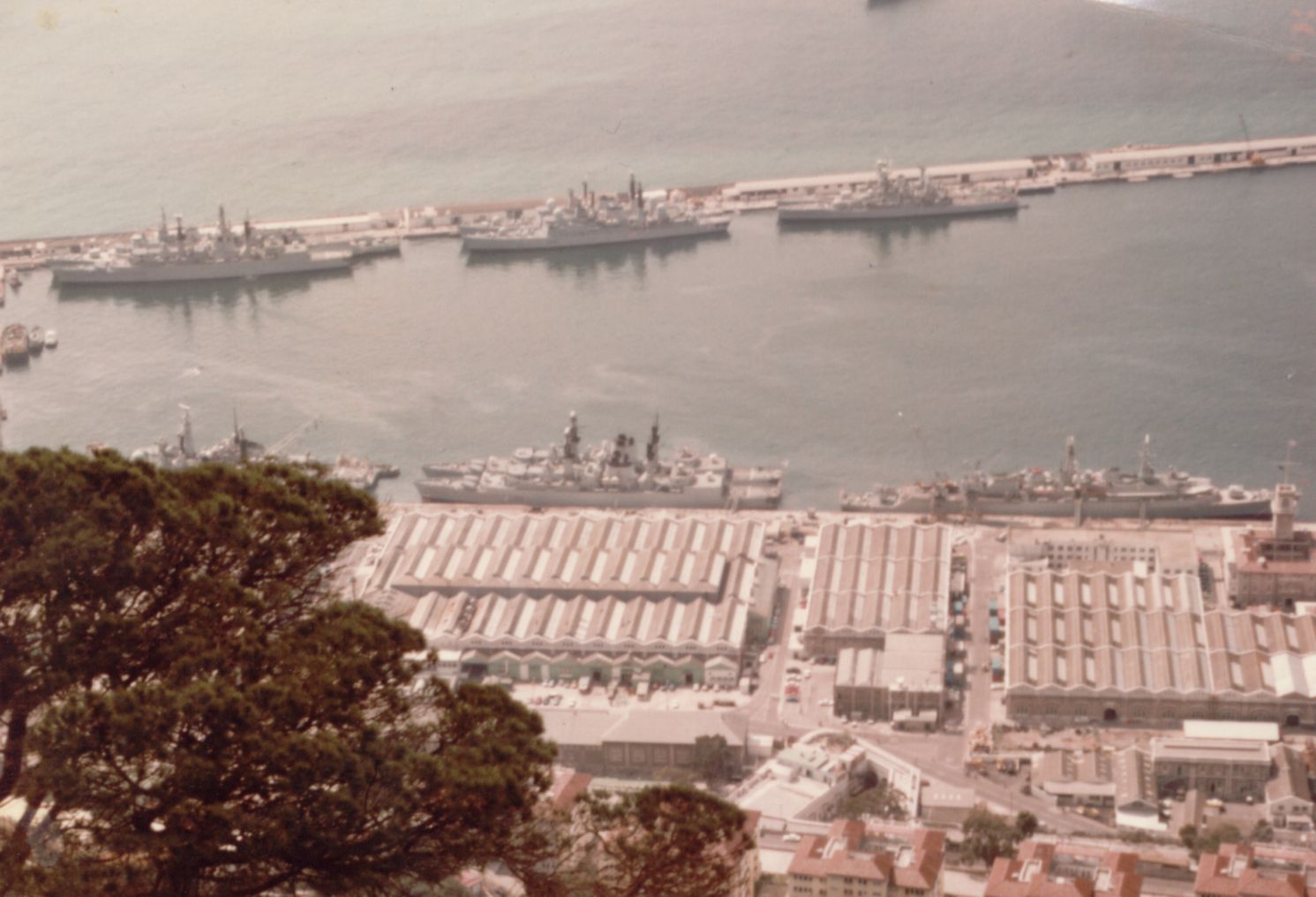 The weekend over and the ships sailed to complete the exercise. This is where the change began. News started to filter through of unrest in the South Atlantic between Britain and Argentina over the Falkland Islands. At first very little interest was shown in the matter but when the islands were invaded things began to change. Ships were asked to report their material state of readiness to Commander-in-Chief Fleet, and within hours some of the Fleet were heading south. What was to be broadsword's fate; "We'll be O.K. we' re off to Singers" came the reply. It certainly looked that way. While many of the ships were being sent south, BROADSWORD turned east, headed for Gibraltar, and after a very pleasant weekend, continued east. Naples was looking good. How wrong we were, for after 12 hours of heading east we were "about turned" and told to return to Gibraltar to take on stores and ammunition. Goodbye nice sunny deployment, hello cold South Atlantic.

Three hectic days were spent in Gibraltar storing ship, and when I say storing ship I mean storing ship. Hardly a corner was left unfilled -potatoes, missiles, stores of every kind were stowed away and when all the preparations were complete we set sail for the unknown of the Falkland Islands.

Leaving Gibraltar for the Falklands

Thoughts onboard were very mixed at the time of sailing. "I can't believe this". "Surely the diplomats can sort this out". "We'll be turned round at Ascension." "The Argentines must back down". How wrong we all were.

Back in the UK the mighty HERMES and INVINCIBLE were made ready, and complete with their squadrons of Harriers and helicopters they set sail to take command of the Task Force. Ships of the Merchant Navy were requisitioned and quickly turned into troop carriers, stores ships and hospital ships to supplement the large numbers of Royal Fleet Auxiliaries already on their way south. Tankers belonging to oil companies were also taken up to help provide the vast amount of fuel required to keep ships at sea and aircraft in the air.

While the ships left the UK amidst great cheers and patriotism, the hunter-killer submarines of the Silent Service were already forming the advance party of the strike force. Cruising silently beneath the waves they were already in the South Atlantic long before we were halfway to Ascension.

After sailing from Gibraltar we rendezvoused two days later with FEARLESS and four Landing Ships. It was only a brief meeting and after exchanging some radio equipment we hurried ahead to catch up with the carrier group. Once we had caught up, INVINCIBLE who had shaft problems was left behind and we pressed on with HERMES and the other escorts.